More than 20 million people worldwide are affected by neurodegenerative disorders and one of the common ones is Parkinson’s disease (PD).

In the United Kingdom about 10,000 people are diagnosed every year. PD is a progressive neurological condition affecting movements such as walking, writing and talking. PD is primarily caused by a significant loss of nerve cells in the part of the brain known as the substantia nigra. These cells are responsible for producing dopamine a chemical that allows messages to be sent to the parts of the brain that coordinate movement.

At the John van Geest Centre for Brain Repair we are working with PD patients in a number of ways.

The clinic uses various tools in order to fully assess the nature of PD such as computer tests for memory, eye movement recordings, drug trials as well as collaborating on brain imaging studies.

Furthermore, other measures such as blood samples are used to carry out laboratory experiments which will help us hopefully create better diagnostic tools, follow disease progression as well as be able to distinguish the various subtypes that underlie within such a heterogeneous disease. 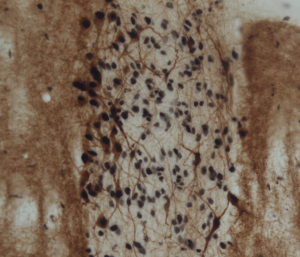