Glaucoma is an age-related neurodegenerative disease characterized by the progressive loss of retinal ganglion cells (RGCs), the neurons which carry visual information from the retina to the brain via the optic nerve.

It is one of the leading causes of vision loss in the world, affecting approximately 60 million people and resulting in permanent blindness in 8 million.  The most important risk factor for the development and progression of glaucoma is an elevated intraocular pressure (IOP) and currently the only approved treatments for glaucoma include pharmacological or surgical methods aimed at reducing IOP.

While these therapeutic approaches often slow the rate of disease progression, they are not effective in all patients and are incapable of reversing glaucomatous vision loss that has already occurred.

Research in the Brain Repair Centre focuses on both pathology and potential treatments for glaucoma.  While high IOP is associated with glaucoma, it is not understood how it ultimately leads to the death of RGCs.

Current work in the BRC investigates how impaired axonal transport or non-apoptotic mechanisms of cell death might contribute to the disease.

New methods for protecting or replacing RGCs in the context of this devastating condition also are being studied.  For example, gene therapy, which directs the retina to produce neurotrophic factors, appears to protect RGCs in various models of glaucoma.  Additionally, stem/progenitor cell transplantation might hold potential for neuroprotective or regenerative therapy. 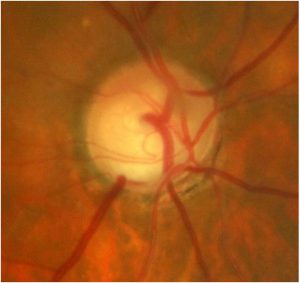