These various methods, illustrated above, have been applied to spinal cord injuries in animals, and have been able to promote nerve fibre regeneration for up to 4cm. This may not sound very far, but 4cm of regeneration in a human with a cord injury would allow some patients to regain the ability to breathe for themselves, and other patients to regain the use of their hands.

Replacing the insulation around nerve fibres

The insulating myelin that surrounds nerve fibres is made by the glial cell type called oligodendrocytes. If these cells are damaged, as in multiple sclerosis, they are unable to make new myelin. However there are many specialised stem cells in the brain and spinal cord that can interact with nerve fbres to make new myelin. In some forms of demyelinating diseases these cells are able to divide, and replace the myelin that has been lost. In multiple sclerosis this remyelination usually fails, for reasons that are still not established.

There has been much progress in finding out how to make large numbers of oligodendrocyte precursors and other myelin-forming cells in tissue culture and transplant them into demyelinated regions. However, the processes that prevent these cells replacing lost myelin are still not fully understood, and until then it seems unlikely that simply transplanting cells into multiple sclerosis lesions will be effective in curing the condition.

Diagram of the myelin sheath that surrounds axons (nerve fibres) 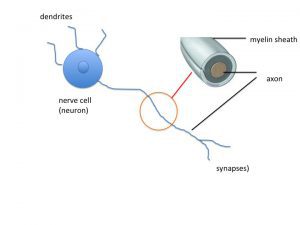 A severe stroke or head injury kills part of the brain. At present the various transplant methods are not sufficiently advanced that this dead tissue can be replaced. However patients show considerable recovery of function after a brain lesion. After a stroke patients are often paralysed over much of one side of the body, yet a few weeks later much of this paralysis has recovered. The process by which this happens relies on the regions of brain surrounding the injury changing their function to take over some of the functions of the dead tissue. This process is called plasticity. Plasticity relies on the ability of neurons to make new connections with one another after injury, and so reconstitute some of the electrical circuits in the brain that have been lost.

At present there are no treatments to control and enhance plasticity, but there are several possible ways to do so, and these are under investigation in the Brain Repair Centre.

Diseases which brain repair will help

More information on each condition can be found on other pages of this website: click on the link