What is Brain Damage?

What do neurons do?

Neurons are the cells in the nervous system that receive and transmit electical signals, or nerve impulses. They are connected together by nerve fibres, or axons, which transmit information from one neuron to another at connections, or synapses by releasing a chemical (a ‘transmitter’).

Thus when you contract a limb muscle and move the limb, a neuron in the motor cortex area of the brain becomes electrically active, and sends nerve impulses down its axon which runs into the spinal cord  connecting to another motor neuron in the spinal cord. This motor neuron, which in turn becomes electrically active, sends nerve impulses down its axon.  The axon of the motor neuron connects directly to muscle cells  at a synapse, which leads directly to muscle contraction.

The whole function of the nervous system depends on similar processes, with information being transmitted as nervous impulses down axons, and passing to other neurons via synapses. 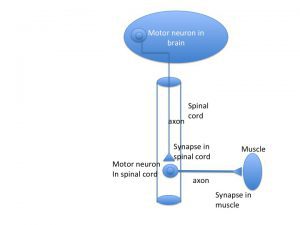